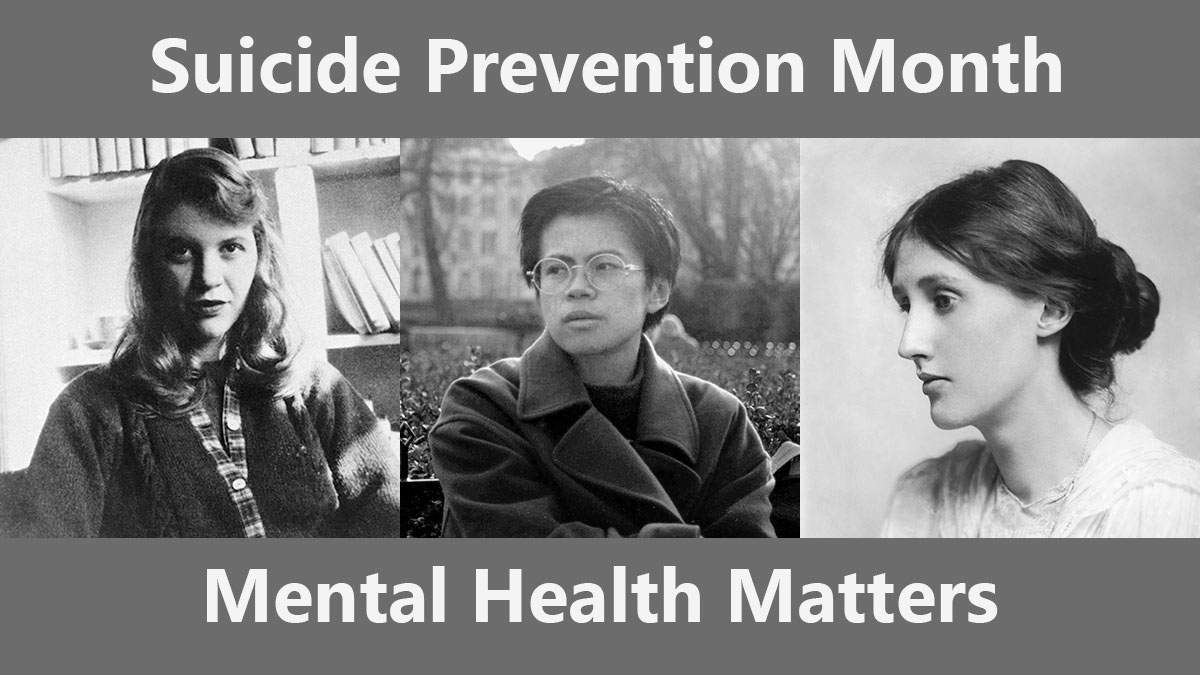 Before getting in further, if anyone reading this blog is sensitive to the topic of suicide by any means, please click away. I sincerely hope all of us will heal with time. I am only writing this article for the reader’s information and for September: the suicide prevention awareness month.

Suicides in Literature have been there for centuries. Shakespeare is one of the earliest authors who included suicidal characters to portray a realistic society and romanticize death. A few examples are Romeo and Juliet, Ophelia in Hamlet, Brutus and Cassius in Julius Caesar, and Lady Macbeth in Macbeth.

In the modern age, suicidal characters in literature became more of voicing out the authors’ frustrations. Many great authors took their own lives because of depression or of an illness. These are the top 3 books I read this year, written by an author who died by suicide.

I read two of Plath’s works this year. Bell Jar and Ariel, a collection of her poetry. Plath is mainly known to the world for her poetry. Bell Jar is the first and the last novel she has ever written before her Suicide death. In both these books, you can see how Plath famously criticized the patriarchal society in which the men had the liberty to enjoy life more than women did. Her feelings became even stronger after her husband, Ted Hughes, left her for another woman. Additionally, to have been through clinical depression and electrotherapy at a young age, the break-up of her marriage is said to have solidified her reasons to commit suicide.

Bell Jar was inspired by Plath’s actual experiences with electroshock therapy and severe depression. Like its protagonist, Plath was wary of uncertainties, including scholarships, relationships, and the future. Even though the story may serve as a trigger for the people who battle depression, it also educated me to a certain level to speak about how important one’s mental health is.

2. Notes of a Crocodile by Qui Miaojin

Notes of a Crocodile is set in the 1980s, during the height of Taiwan’s LGBTQ human rights movement. Qiu Miaojin was a Taiwanese lesbian author who battled depression that unfortunately led her to take her own life at a young age, similar to Sylvia Plath.

Notes of a Crocodile tells the story of a lesbian college student who tries to figure out life the best as she can even though things around her start falling apart half of the time. Like Miaojin, the protagonist deals with the depression and social pressures of being a lesbian in Taiwan back in the day.

3. A Room of One’s Own by Virginia Woolf

Similar to Plath, Woolf is a victim of the patriarchal society. At a young age, she had to endure sexual harassment from her brothers, and she also had to face the deaths of her parents and a sister. Later in life, being married to Leonard Woolf, she led a happy life (she even mentions how thankful she is to her husband). Regardless of the life became happier with her marriage, she was still battling the trauma, and it is said that she was also suffering from hallucinations and bipolar disorder.

A Room of One’s Own is an extended essay written by Woolf with the concept: a woman must have money and her own room to write. She speaks about how the economic and educational obstacles have strangled women’s creativity. It was an interesting short read and a nice introduction to Woolf as a writer.

I couldn’t help but think if the unfortunate events did not lead these authors to die at a young age, how many other fantastic books and poems would they have written?–Just a thought I had while reading these books.

Review: "The Ones Who Walk Away from Omelas" A Short Story by Ursula K. Le Guin